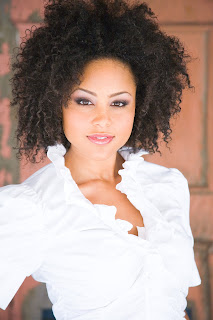 Hayley Maire Norman
Actress, Model
If people come into your life for a season or a reason, then Miss Hayley Marie Norman has potentially come into my life for the sole reason of keeping my ass on the treadmill that much longer! Over the past year we've become gym buddies and during that time, I've seen her career grow leaps 'n bounds. Our schedules did not permit a one-on-one conversation, so we conducted our interview over Myspace.
You have a picture of yourself with Donald Trump, aka "The Donald", on your myspace page. How did that come about?
Mr. Donald Trump has actually become a friend of mine. My friend Lindsay Clubine, introduced us after he appeared on Deal or No Deal. I've had the opportunity to hang out with him on various occasions, and this time was particularly fun because it was for his birthday celebration. They flew us to NY where we stayed at The Trump Towers and ate at the amazing Jean Georges. We then took his private helicopter to Atlantic City where the party was held. I've had the opportunity to go to some really cool events of his. He honestly is a great guy!

We've spent some time together side-by-side on the treadmill; how much time/miles are you up to these days?
lol...Although I still use the treadmill at least a few times a week, I just recently took up Bikram Yoga which I am really excited about! I love it!!

And how is your relationship with the stairmaster going?
The stair master and I are still great friends :) Although, it is a love/hate relationship.

You've had a busy first quarter. Tell us a little of what you've done....
I just completed a lead in a feature film based on a comic book, called Trailer Park of Terror. In case the name didn't give it away, it's a horror film. We honestly had a great cast and crew who have done amazing work. We have some huge studios looking at the film for a theatrical distribution so hopefully it'll be in a theater near you in about a year or so. I also booked a role on The Young and The Restless, and completed a supporting role in another film called Broken Windows. And, I go back to Deal or No Deal in July! So, its been busy, and I expect it to get busier and busier!
Editor insert: If it is solely up to fans, Hayley will be swamped! "franz69" a fan from IMDB (Internet Movie Database) wrote: "I am in love with this woman. She is perfect. I love watching her on tv and I cant wait to see her larger than life on the big screen. I will see [Trailer Park of Terror] just to see her."

What was your first acting role? (Remember, no role is too big or too small!)
Well, I started modeling and doing children’s shows when I was 7. My first commercial was for JC Penney’s! I believe my first TV show was a Disney Family Channel Show called the Great Pretenders. Fergie was the host, but at the time she was Stacey Ferguson of Wild Orchid. The premise of the show was child actors/dancers/ singers performing their favorite musical acts, and then the studio audience voted on one. I got first place!!!

What is one goal you wish to accomplish by the end of 2007?
MORE ACTING ROLES!!! MORE MORE MORE!

Do you like a Bad Boy or Lady's Man? (why/why not)
I like men who look like Bad Boys on the outside, but are tender intellectuals (wow! That sounds soo corny!) on the inside, and of course someone who knows how to treat women. Lady's Men tend to be really into themselves...


For more on Miss Hayley, visit: www.myspace.com/hayleymarienorman
Posted by The Hot One at 2:23 PM