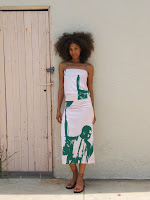 Dating is hard and it’s even harder when you have a friend who gives you advice to change yourself to make yourself more attractive. However, for Miss Kahshanna Evans (actor/designer/creative-extraordinaire) and self-proclaimed “Fire Diva”, this friendly advice was a soul-baring wake up call that sparked an interesting “ice breaker” for a recent relationship. Below she shares her multi-part exploration into loving herself while trying to find love.

“Social Obligation can have fatal doses…or worse, can lead to romantic flat-lining and utter destruction of your character” – K. Evans.

It still lights me up when I think about it. I was excited to go on a date with someone and my gal pal said, “Whatever you do, be easy going, agreeable, make interesting conversation that interests him…overall just ‘be cool’.” Basically she said: Don't be yourself… She was trying to gracefully let me know something indirectly about how impulsive and firey I came across back then. BTW this was before I made a commitment to myself that, as a woman, I have to take the risk to be myself under even the most intense situations.

Was there any good, sound advice to be absorbed, advice that would, in fact do what she set out to do, which was to empower me? I have thought about that too. The truth of the matter was, she did care for me and was trying to help. Kudos.

Mind you, I feel more flexible than I ever have, more compassionate, more able to create healthy boundaries and am the most committed to taking care of myself and the person I love than I ever have been in my life… but back then I took her advice seriously for some God forsaken reason. Was that the world I was in? Were my only chances to meet someone of the opposite sex guided by me being someone else, or presenting a “representative” who would drive home the deal long enough for, well, WHAT, exactly?? Long enough for us to feel more intimate, get closer, only to realize we are completely different people?

The date:
This guy was one of those everything guys: he was a young, black author, had his PhD(s) and was on television…He was highly intelligent. The date went ok…that was it. What he thought would showcase him as some successful tycoon just came across to me as arrogant. He took a call on his cell, and called me “trendy” and from then on I was “over it”. Points lost, buddy…he had the nerve to want to take me out again. Bye-bye. He's lucky he didn't get the smack down. I did decide to be myself…I did not curb my fire and somewhat contain my impulses. I didn’t want to be with someone who classified me that way.

Recently I met someone new and I like him; he’s funny and intelligent, motivated, shows genuine interest in my mind and gives me attention and when he calls me beautiful I believe him and it feels good. Soon after we’d met a few times, I thought, “Am I being myself?” Not just the nice first- impression self, but really my own candid, opinionated, wild, emotional self…I decided to put my money where my mouth was, call my own bluff on this ‘be yourself’ theory. I wanted to know about my own personal level of honesty.

I wrote a three page email, you know the one that after you press send with such nonchalance you think, “OMG, what did I just do?”…Was I doomed, would I be banished to an unruly single people's island like the land of misfit toys on that “Rudolph the Red-Nosed Reindeer” Christmas cartoon? Spike [Lee] where are you -- did I do the right thing? The battle ensued between my protective fire-diva and my conscience goddess. No, I told myself, you are a woman and you are who you are and if he’s going to stick around he's going to stick around, no need in being afraid anymore.

Ed – Were you afraid he would leave?

K: I feared I would like him before he liked me, which then maybe means I feared he would leave.

Find out what happened after Miss Evans sent her firey three-page email in the next issue of the Brown Betties Gazette!
Posted by The Hot One at 4:34 PM