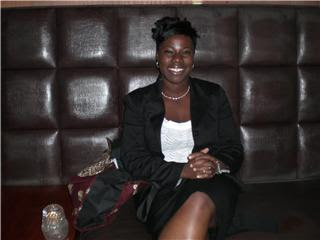 
Meet Yemi. A Nigerian, Yoroba woman with more confidence in just one tip of her spiked jet-black coif than most have in their entire core being. Her full name is Arinolayemi Atinuke Adegbonmire….or “Yemi” for short. With twenty nine letters in her name, which she has been able to spell forwards and backwards since grade school, it’s no wonder Yemi has risen to the top of her class.

Whether it was through her smarts, lightening-speed wit or her ancestral guidance (Arinolayemi loosely means “at home in the midst of wealth” or “of royal birth” and Atinuke means “cared for since the moment of conception” or “the hoped for”), Ms. Yemi has found herself in ABC Entertainment’s Legal Affairs department where she is becoming instrumental in contract negotiations for some of our favorite network programs.

Why did you get into Law:
It was a natural nexus of my skills as a writer, critical thinker and orator. I also had a passing interest in working in entertainment as a writer. I think that art can translate the human experience…If I couldn’t do that as an artist, then what better way than to insure a passage for others?

You are a great orator. Speaking with you sometimes is such a treat!
I remember around 9 years old I could hold court with adults and in 7th or 8th grade I found Shakespeare accessible, lyrical. I figured that must mean something! Plus, I’m a Cancer with my moon in Pisces [Birthday = 6/26]…I’m a water sign and we are very emotional and deeply affected by things. I like to ruminate and reflect.

You’re from Baltimore, Maryland and spent some time in Washington, DC working in Public Health before getting your Law degree from Wake Forest School of Law. What was that like?
I wanted to help the underserved so I worked in the Department of Health and Human Services Bureau of Primary Health Care. The Director of the Bureau, Dr. Marilyn Gatson, was really making strides building trust with skeptical communities that distrust government...even getting them to come in for preventative services...emergency room utilization was down...and when the administration changed from Clinton to Bush, all of a sudden she was gone. I felt like, with so much momentum, “Why?!” I learned then that sometimes working in public policy wasn’t always about caring for the underserved…I realized as well that I was too young and too hungry to parish in an industry where it functions to serve itself.

You then started your “LA Grind”, as it were?
II got to LA in May of 2005, that summer I took the Bar and in November 2005 I got my results and found out I passed. In April 2007 I landed at ABC. In between all of that I hustled. In Fall of ‘05 I volunteered with an entertainment law firm, started my own practice in January of '06 where I shopped shows (and which I promptly shut down the first time I had to hunt a client down for my fees). I wrote articles; I did contractual work with larger firms; and I taught an after-school dance class in Inglewood where I was completely humbled and learned to appreciate and respect the personalities of children! And starting in April of '06 I worked with another attorney in her production company. By April of '07 I was at ABC.


What is your current objective:
To be the best attorney that I can be and to be effectively self-sufficient as quickly as possible.

Editor’s note:
Yemi Adegbonmire is bound to make excellent strides in her career as she makes an impact in the entertainment industry and beyond. Equally important, Yemi is an amazing soul with a deep well of insight, outlook and human compassion.

Her email signature sums it up:
"Our friendships are the currency of our lives."-Toni Morrison
Posted by The Hot One at 11:02 AM

Wow--I'd better be careful the next time I say "I've worked hard!" cuz this sistah takes the cake!
Glad to know Sis. Yemi