There was a saying in our household that was passed down from Grandma Hamm to my mother and then down to my sisters and me. I’d actually call it a mantra that became ingrained into my being because I heard it so often. It was: "You can eat it fast or you can eat it slow, but when it's gone there ain't no mo'." Grandma Hamm, strong-willed and strong-boned, moved from rural Wright City, Missouri to live with relatives in Lawrence, Kansas when Grandpa went into the Army. She had seven children; worked as a housekeeper; and like everyone else, she knew hardship. For grandma and momma the bottom line was feeding their families. Momma never asked what we wanted to eat. You ate what was put on the table or you DIDN'T.

I didn’t like onions. When they were on my plate, I ate … SLOW. There was momma’s tuna casserole, tuna salad and potato salad that were full of them. It was like you had won the diced-onion lottery. I would spend what seemed like hours at the table picking diced onions out of my food before I could even eat it. I hated that crunch of the onion between my teeth, let alone the taste. How my three sisters laughed. Everyone else would be in their pajamas and I, the youngest, would still be dissecting my food one teaspoon at a time. Creamed onions, which were my mother's favorite and far too concealed in white sauce for any form of dissection, had to be swallowed whole with a Kool-Aid chaser. (I still cringe to this day.) Oddly enough, there were exceptions: fried potatoes and onions and fried liver and onions. Both were cooked so long that the onions kind of melted away or they were burnt to a crispy charcoal and were easy to detect. 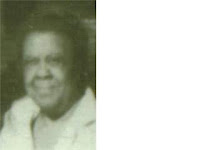 Under the “Eat It Fast” category was fried chicken. My sisters say we ate a lot of my mother’s variety at home, but my favorite came from my Grandma Rogers' house on Sundays (pictured left). We'd walk to her house after Mass hungry with anticipation; maybe that had something to do with it because by both momma and Grandma Rogers (a Troy, Kansas native) were excellent at fried chicken. They always cut up their own whole chicken. The pieces were then shook in a brown paper bag with salt, pepper and flour and then fried in hot Crisco shortening with half a stick of Oleo margarine added in. We ate it all too: the backs and breast; liver and gizzard; heart and neck; and the legs and thighs. This was a meal during which you did not leave the table because after the blessing, it was every fork for themselves. Fifteen minutes later the dishes were hitting the sink.

I guess we all remember the foods we hated or loved. Today we still eat fast -- but it's usually at the drive-through. We still eat slow --but it's to avoid indigestion. However now, it's rarely NO MO' and I say, "Amen" to that!
Posted by The Hot One at 11:19 AM