A Brown Bettie Who Gets It
By Peppur Chambers 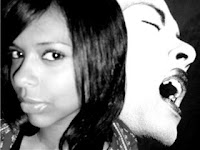 Meet Graph Nobel (“No’bel”) a singer/songwriter from Toronto, Ontario Canada who, in her petite frame, tames a giant hypnotic force that captures you like a spell when you’re in her presence...just as Billie Holiday did.


We missed each other the last time Graph was in LA, so we conducted this interview via our MySpace email accounts:

I saw you on stage at the Roots Annual Grammy Jam Session at Key Club in '06 and again this year. I thought, "That girl is cool! I want to be like her!" In my world, that means you are a Brown Bettie! Describe what makes you that woman on stage:
When I'm onstage everything that is bottled in me must come out…The fun, the passion, my rage, my sadness. I have no fear letting it out. Plus I love, love, love 2 have fun!!

When did you know that singing was a way you could express yourself?
It was hip hop that inspired me to have a voice, Rap music addressed so many issues that pop music did not, racism, politics, overt sexuality, black community struggles and history that is not offered in text books. A Tribe Called Quest really did it for me, when I saw/heard Low End Theory I was like, "now that's my kind of black" not the Whitney Houston or Pebbles or whatever else pop music thought young black girls are supposed to be into. I'm still like that now I'm all about the Clipse, Kenna, Martina Topley-Bird not Rihanna or Fantasia.

Is singing and/or performing on stage still the best way for you to express yourself? Why/why not? {i.e. Have you found anything else that makes you feel as good or as powerful or as sexy/sultry/sassy?}
Any artform I can put my opinion into makes me feel powerful, I've been working on a musical, a graphic novel, a gallery show. Knowing what I want makes me feel sexy whether I'm ordering off a menu, making an important decision or hunting a new fling. Confidence is the most important ingredient in sexy.


If you are in a reincarnated form, who or what do you think you were before?
Dorothy Parker- I wish I was her previously.

[Dorothy Parker was an American Poet known for her wit and sarcasm. The following poems are from Enough Rope: Poems by Dorothy Parker (1926) I chose them because they made me laugh - pc]

Observation
If I don't drive around the park,
I'm pretty sure to make my mark.
If I'm in bed each night by ten,
I may get back my looks again,
If I abstain from fun and such,
I'll probably amount to much,
But I shall stay the way I am,
Because I do not give a damn.

One Perfect Rose
A single flow'r he sent me, since we met.
All tenderly his messenger he chose;
Deep-hearted, pure, with scented dew still wet --
One perfect rose.
I knew the language of the floweret;
"My fragile leaves," it said, "his heart enclose."
Love long has taken for his amulet
One perfect rose.
Why is it no one ever sent me yet
One perfect limousine, do you suppose?
Ah no, it's always just my luck to get
One perfect rose.

What were you like when you were five years old?
Exactly what I am now: a child who listens to music all the time and dancing to it.

What do you do in your solitude?
In solitude:
write write write
read read read
dream dream dream


Do you consider yourself "A Lady", "A Bad Girl" or some combination of both? Why?
I'm a good girl with a bad streak. I'm pretty straight and narrow, cool as a fan, but as a teenager hung out with hustlers and guns, and I have continuos suicidal thoughts that haunt me.

When did you learn that there are two sides to every love story? {i.e., Nothing is easy about love}
After being in love with one person so strong, and then also having the thought of killing them too. I wrote a song about it called "Something 2 die 4". Causing bodily harm to someone may fall under bad streak, but after watching hollywood films or listening to Miss Otis sung by Ella Fitzgerald or Stan (Eminem) or Hey Joe (Hendrix), I consider it to be normal.

What's one thing your momma said (or an equivalent) that you'll never forget?
Mom says: Jump high, jump low, if it's meant for you, you will have it.

What's on the horizon for you? (Any horizon)
Planning to collaborate with Brown Betties. Playing the shit out of the west coast, keep recording, more writing.

Contact Graph and listen to her smashing tracks like Biznz or Plzr at: www.myspace.com/graphnobel
Posted by The Hot One at 3:24 PM

Graph Nobel is the Truth, ya'diG.