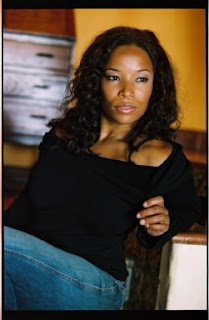 A Brown Bettie Becomes Her Dream
by Peppur Chambers
LeShay ("Mad Energy") Tomlinson Boyce
Actor. Newlywed. Bonus Momma
Miss LeShay and I met years ago in Chicago's former upscale hot spot, the Shark Bar where she was a waitress--rather, I'd like to say she was the self-appointed "Maitre'D Mamma-Hostess With The Mostess" of a grand par-tay. Were it not for her required server uniform, I imagine LeShay would have worked the deep mahogany room in a crisp, white Dior party dress with a dry martini in one hand and a delicate mini-quiche in the other...all while graciously smiling at her guests like Mr. Roarke on Fantasy Island. Most times, LeShay was the primary reason my crew and I would return night after night because she made me feel so welcome. LeShay was also one of the first of my Chicago friends to declare that she was moving to LA to act in film. I remember thinking, "Wow! For real?" I, myself, was headed to New York to sing, but to act in LA...now that was somethin'. Today, LeShay, a native of Queens, NY and an eight-year transplant to Los Angeles is a working actor and a newlywed which not only elevated her status to that of "Mrs.", but also placed her on a new throne of motherhood. Even with all these titles that bring on a new set of responsibilities and demands, she remains as gracious and talented as ever. Recently I saw her on stage at the Hollywood Black Film Festival (HBFF) Storyteller Competition where she acted in a scene from Derek Lively's finalist screenplay, "The Nigga", about an out-of-work Shakespearean actor who transforms into a gangsta rapper and becomes a star. While playing a grounded, yet sassy, strong-willed executive who'd been wrongly accused, her graciousness towards the other actor, David Bianchi, as well as the command of her craft had the audience suspended on her every word. (As a result, this screenplay also won the competition!)

Ultimately, Mrs. LeShay Tomlinson Boyce knows how to ENTERTAIN and anyone that knows her, whether professionally or socially, will say the same.
LeShay, I've been wondering something: I tend to pronounce your name Lah-Shay and sometimes I hear you see Lee-Shay. Which is it, please?
It’s technically LeeeeeShay. That’s the name my mother gave me– when I started school my teachers would add the jazzy French pronunciation Lahchez, and I didn’t bother to correct them because I liked that too. LeeeShay is reserved for family.
As actors, we are constantly being defined, undefined, redefined...How do you define yourself these days? If at all?
For the first time in my career, I’m not defining myself as just an Actor. Which is really a nice change – I’m now a real grown up, with responsibilities – it’s really something. So now I define myself as a GAW – a GROWN ASS WOMAN!

What's your next project?
Well now that my former employer’s been acquitted of all charges, maybe “KATHY” from ‘Trapped in the Closet’ will appear in Chapters 50 – 100 of the next installment. :)
KIDDING.
But seriously, I currently have two AFI (American Film Institute) films traveling the festival circuit, the comedy “The Lutheran” and the drama “Stitches”.
What is your biggest dream?
Receiving the Tony Award for my 1 Woman Show on Broadway directed by Meryl Streep.
Do you have any re-occurring dreams? If so, tell us! If not, why do you think that is?
YES! It’s the one where I start chewing a piece of gum that gets bigger and bigger, and every time I try to pull it out, there’s more and more gum in my mouth. I think it means, I have a lot to say and I NEED TO JUST SPIT IT OUT!
What scared you today - literally or figuratively?
The thought of my in-laws coming.
In my opinion, you are a person that creates synergies --whether you are making your famous tuna salad or whether you are on the big screen. How do you maintain this mad energy?
Wow. Thank you. Actually it’s genetic. And God on the inside of me. 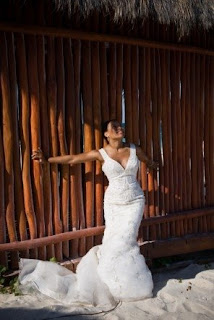 You were married recently in Mexico to a wonderful man. Do you remember the day? If so, what stood out the most for you?
The overwhelming feeling of Joy –It was the happiest I’ve ever felt.

What advice would you give your step-daughter as she grows to become her own Brown Bettie?
Wait.
Don’t rush in to anything….Think before you act.
And don’t call/text him, if he likes you give him the opportunity to pursue you.
There's a classic Peanuts book titled, "Happiness Is A Warm Puppy" (Charles Schulz' first book). It sites random stuff that makes a person happy, like, "Happiness is a blank piece of paper". Fill in the blank.
"Happiness Is FORGIVENESS."