Two Sides to Every Love Story
By Sidney Gaskins

Most little girls, as they are growing up, dream of the white picket fence, the husband, and having two children. That is not my story. My Love Story began when I saw a little boy at a foster home in October of 2000. When I tell people about meeting him, it sounds like a made-for-television drama.

The winter began to set in on Cleveland, Ohio; I worked in the Department of Children and Family Services as a social worker. My first children to visit were two girls placed in a foster home. Single, college graduate, no children, those were my basic stats. As I sat on the couch of the foster parents’ home, a tiny boy hid behind the curtains playing peek-a-boo with me and laughing. Soon after his antics with the curtains, he crawled up on the couch, sat next to me, and just looked at me. He moved closer, and then closer, eventually he was on my lap. In a moment of freedom I said, “I’m gonna take you home with me.” There came a day when his foster mother told me he was available for adoption. My heart stopped and I got worried that I would never know how he was or what happened to him. So, I made the choice to adopt him. Single, college graduate, no children, those were my basic stats. Little did I know that day would be a day to chance two lives. 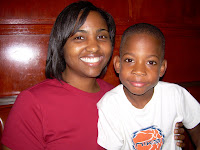 Jamil officially became my son in March of 2003 at the age of 3 years old and the Love Story is still being written. Adoption to me is no different than having a natural child. I question my fitness as a parent, whether I made the “right” decision. And there were times, and still are, when I thought he would be better off with someone else. He would have two parents, a house, a yard, a dog (like he begs me to get), and other siblings in the home (like he begs me to get). And were it not for the support of other family and friends, we would not have made it this far. He is what I live for now. He is the Love of my Life.

I received a call from my sister in California, whom he stays with for part of the summer. He is now nine years old and was asking about his birth Mother. I became worried. She had probed him on what he would change about his life and he said, “nothing”. He expressed that he loves me, he is happy to be adopted, and he would not change that at all. Neither would I.

Still single, still a college graduate, one child, those are my basic stats. Little did I know that day would be a day to chance two lives. That is my Love Story.

Sidney Gakins, Personal and Business Developer/Consultant/Coach, operates Enterprising Life in metropolitan Atlanta, GA. Enterprising Life encourages individuals and businesses to look outside of the box to unleash their dreams and achieve success. Services include exclusive personal & family sessions, executive and management coaching, staff development, and group coaching. For more information visit: www.EnterprisingLife.com or call 678.886.3174 . Are you thinking of adopting? Contact your local social services agency, Adopt America Network www.adoptamericanetwork.org and the National Adoption Center www.adopt.org .
Posted by The Hot One at 11:12 PM