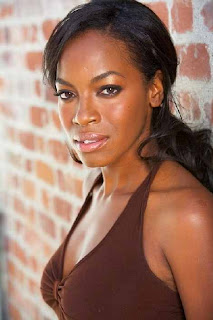 
I feel like I should start this article like those in “Interview” or “Variety” or the “LA Weekly” where the writer says, “Not since (insert famous, talented person) has there been a talent as witty, solid and beautiful as Milauna Jamai” or…”(So-n-So) had better watch out because Ms. Jemai, one the industry’s most looked-over talents, is about to reach her top rung”…or simply, “Milauna Jemai is The One to Watch”.

Milauna Jemai, born and raised in Chicago, has a passion and spirit that lets you know she will stop at nothing to reach her goals as a working, ok, we’ll say it: WELL-KNOWN” top-billed actor. (The only thing that could stop her is if a director said she was not allowed to floss – see below!) Milauna understands the game; she knows where she fits; and she’s working her damnedest to shine in that niche. I think she has every type of flashlight, high-beamed laser, emergency flare stick, or book of matches in her back pocket to make sure she gets her shine on.

If you can stand the brilliance, read on!

What is one thing you still do now that you did when you were 10 years old?
When I was 10 years old, I used to try to fight the boys. I still do that now. Men are always saying, "Why do you keep hitting me?"

What is one truth you've learned about the entertainment industry that you didn't realize was so ...true?
Nepotism is real. Believe that.

I saw you on stage in "69 and other numbers...”-- what was the exact title? I didn't know you then and still thought you were hilarious. Tell us about your role and what intrigued you about it?
“Sex is a 3 letter word, 69 ain't just a number”. The show was more like a sketch comedy show, so I played many different sexually-charged characters. It was the first time in Hollywood that I actually did a comedy. I was tired of doing dramas and had a Halle "BAPS" moment. We had audiences that varied in sizes. Some nights there were more of us on stage, than in the audience. But those 4 people laughed dammit.

I find you to be very funny. "Ha-ha" funny. You've tried stand up before, but... tell us what happened!
Standup wasn't fully explored. I had an audition where I did a routine and it resulted in a pretty embarrassing moment. I realized that I shouldn't work for the laugh, but for the character. The audience might laugh on the inside or on the ride home. But they will laugh. If they don't, fuck em'.

Where is you favorite place to have a "meeting" in LA?
Folks actually have meetings here? What's going on in said "meetings"? Is there illegal activity going on during these "meetings"? I ain't into that freaky stuff, Peppur. Unless there's food included, then I'll do it. This one time.

You're from Chicago, what do you miss most about home?
I MISS THE FOOD! I miss the culture, the seasons, and the damn radio stations.

You seem to be incredibly focused about your acting career. How do you keep going?
NO SEX. Sex is a trap men use to get you off track.
Editor’s note: HA!

What do you love most about acting?
I love to be able to escape my reality and live vicariously through others. I can be the daughter of a bureaucrat, marry a billionaire mogul, and live a life without pressures. Plus I've met some pretty awesome folk acting.

I think about the scene from Eddie Murphy's, "Raw" when the kid tells the doo-doo joke in the beginning. Somehow, I see you doing that. Did you have a doo-doo joke moment that ultimately let you know you wanted to be an actor? If not, was there something else?
I was always the kid that participated in the Easter, Thanksgiving, Christmas programs. I was the first kid off book, with the longest monologue. I went to a Lutheran grammar school and used to act out the hymnals and sermons. In my room all by myself. My grandparents thought I would be a preacher. In middle school, me and my mom worked on my monologue for a school project and it was truly a "doo-doo" moment. Not a single person laughed. The Japanese boy was the star that day with his Laffy Taffy, knock- knock jokes. I wonder where Carl Lee is today? Hmm...

What is your definition of "Love"?
What is my definition? Good question. Let me get back to you on that one.

Love is like a finding a broken meter, when you have no change, and it's right in front of your destination. You feel like the luckiest person on the block and feel great that you don't have to rush if you don't want to. You can take your time. But when it's time to leave that meter, it's hard, but you do it. Hoping in the near future you find another one.

What was your first acting gig, what was the most recent and what are you doing next?
My first acting gig was Twista's video "Emotions" as his girlfriend (watch video here). I thought he really liked me. I was wrong. He was just actin'.

My most recent project is a guest-star on "Lincoln Heights" which premiered on ABC Family, 9/16, 8/7c.
Watch her episode, "Glass House" here!

My next project is a secret and I can't reveal any details just yet. But it's got some actors in it and it's about something funny, and that's all I know right now. It G14 classified and they might be reading this as we speak.

Have you ever tried to Tango?
No to the Tango. You teaching or should I wait for my shot at "Dancing With The Stars" to learn?
You're very diligent about dental hygiene. How many packs of floss do you go through in a month? Better yet, what is your favorite brand and why?
Girl do you know me or what? I usually buy it in bulk. Can you say family pack? Johnson & Johnson “Reach” brand, Spearmint flavored, waxed baby or unwaxed. I'm nasty like that.


Girl it's been fun. Let's do it again. Next time at that secret "meeting" place.
Posted by The Hot One at 2:22 PM