The New Haiku
Each month we'll feature a New Haiku from
Tanya Alexander, poet and director of Harlem’s Night Cabaret


This month, we decided to include one of Tanya’s original poems. It’s message is priceless:

Recession?
How 'bout progression?
Bountiful sessions that teach us life lessons.
Pleasant like children who finger paint yes's that hang on the fridge of their fathers and misses.
More's not less's.
Good, better, best's.
Counting your blessin's and relieving all stresses.

How 'bout successes?
Organized messes and chaotic guesses that bring about wishes with
New visions and freshens our passions.
Gives us rations of abundance and fashions a soul harmonized and long-lastin'.

Can we say yes's?
Instead of negation, excuses of races, hatred and stagnation?

Can we see faces?
With eyes that speak and move beyond places of
Color, gender and sex orientation?

We are a nation.
A world of free spirit that moves through space and
takes shape and
remakes and
becomes something great.

We can see visions and listen and move to new levels of enlightened positions.
We can change our perspective, be still and reflective, become a collective and then effective.

Don't believe what you hear, ya'll.
Ain't no recession.
There's only progression. 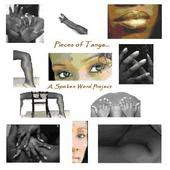 Get Tanya's new spoken word album, "Pieces of Tanya", on Itunes or CD Baby. Some soothing samples are here:
Posted by The Hot One at 6:04 PM