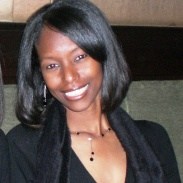 by Peppur Chambers
If you talk to anyone that has every worked with Megan Hughes professionally, they're sure to tell you that she is a class act. On the streets, (or behind closed office doors) some would say, "Damn, that girl knows her sh*t!" And, she does.

Megan is the type of person who works tirelessly, produces amazing results and does so without breaking a sweat. I met her during a dancer's audition for Chicago's now defunct Chicago Rockers men's CBA (Continental Basketball Association) team. She floated in, learned the audition routine and basically nailed every double turn, high kick, and hip roll with the greatest of ease while flashing her gazillion-watt smile. I made sure I stood by her during the audition process! We both made the team and later both made the World Champion Chicago Bulls "Luvabulls" dance team where we entertained thousands during the amazingly fantastic and historic Jordan-era.

Ms. Hughes still captivates audiences -- only now she does so in the boardroom. She still entertains thousands... it's simply behind the scenes!

Meet Megan. (And if you don't want to piss her off, pronounce her name as "Mehgan" - not "Meegan"!)
Please give your exact title and state how long you've been at your jobby-job. Marketing Director, Genesco Sports Enterprises. I have been in this role for a little over two years. I handle the motorsports marketing for Pepsi Cola North America. I love my job!

r Miranda at work? (or, Pam Grier's Foxy Brown, perhaps?)
Hmmm…that is a really good question. I have always thought I was Carrie, but sometimes I think I take work (and life) a little too serious, which makes me Miranda. Actually, I probably have a bit all the girls inside of me!
What is your favorite part about the NASCAR Race and do you have a favorite driver? (NASCAR is one of Megan's accounts)
Well, the best part is when the Grand Marshal says “Gentlemen, start your engines”! If you are on the track near the cars when they all start up their engines, it’s the most amazing experience ever! Your heart skips a beat…you can’t even hear yourself think…you get chills! My favorite Driver…I have two. Jeff Gordon and Dale Earnhardt Jr. They are about as different as they come. Jeff is bright lights and paparazzi, while Dale Jr is a beer and video games!

Back in the day, you had a dream to be the first black female General Manager for the NBA. Is this still your dream?
While I still think that would be an awesome job and an incredible accomplishment, I don’t think it’s necessarily my dream anymore. I have since been introduced to so many new opportunities and new experiences.

What is the "Top" for you...either professionally, socially, personally...what are you reaching for?
I definitely used to think that the “top” for me had something to do with my professional life, but I don’t feel that way anymore. The “top” is that peak where you have achieved balance…professionally, personally, and spiritually. I am not there yet because my professional weight keeps pulling me down. I am really searching for the personal and spiritual right now…then I will be balanced enough to be at the “top”, the peak.

Who is your favorite designer?
That’s a good question. I don’t really have a favorite. However, I do like clothes!!!! Oh, and shoes!

If you could chose to live anywhere (and surely you can), where would that be? Why?
I have always wanted to live in Europe (Italy to be more specific). I was blessed to be able to live over there for about three months, but I would have loved to have stayed there for a couple years. I think it’s important to expose ourselves to different cultures and different ways of life. In the states, I would pick Dallas or Charlotte. They are both beautiful cities!
You went to Hampton University, what did you love most about being there? Growing up in the white suburbs of Kansas, I was often times the only Black in a classroom or on a sports team. There was rarely a chance for me to connect or identify with someone who had similar life experiences as me. Hampton allowed me to make those connections. Plus, there were some very sexy men there! :)
Is there anyone from Hampton who you lost touch with that you like to see again? There are a couple of my line sisters (Alpha Kappa Alpha) that I would absolutely love to see again! We went through so much together during our time at Hampton…it would nice to re-connect with them.

Your younger twin sisters were featured in the first issue of the Gazette...what's it like not being a twin? Do people ask you that as much as people ask me "Where's the salt?"
Ha! I love it! What do you say when people ask you about the salt? Editor's answer: I say "On the table!" I don’t mind not being a twin. I think my sisters have a very special and unique relationship with each other, but I am not jealous of that. People ask me if I feel left out sometimes, but I am such a loner, so I don’t feel that way at all. The hardest thing is when my sisters are mad at each other and they area both calling me telling me their side of the story and wanting me to agree with them. That puts me in an awkward position, but I guess I am used to it now.
You love food. I love food. What's knocking your socks off these days restaurant-wise?
Knocking my socks off…I used to be able to eat Mexican food everyday, but since moving to NYC I can’t seem to find a good Mexican restaurant (and believe me…I have tried them all). I seem to always have a craving for sushi! There are some great sushi spots in the city. I guess that is my weakness right now!

Editor’s note: There’s that one place near SoHo that I like. If I could remember the name, I'd tell you.

When you were the choreographer for the Chicago Condors Women's ABL (American Basketball League) team dancers, what were you thinking would be next for you?
At that time in my life I had no idea what would be next. That was when I was torn between entertainment and corporate. I would have loved to continue choreographing and going down that career path, but I felt like I was being pulled in this other direction. I really miss dancing and choreography. I miss being creative!

When you were a little girl, did you know what you wanted to be? Are you that...yet?
I don’t remember wanting to be anything specific when I grew up. I never dreamed of a certain career or of being famous or getting married or any of those things that little girls dream of. I do know that I ALWAYS wanted to make sure my parents were proud of me no matter what. I have this overwhelming fear of disappointing them. I think I have done a pretty good job of making them proud! Thank you!!
Posted by The Hot One at 10:43 AM