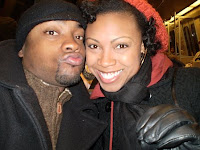 Our Brown Bettie Keena traveled to President Obama’s Inauguration in Washington, DC and kept a small diary. Here is Day 1 of her travels with boyfriend, Ajamu:

Day 1:
We packed our bags and headed out very early in the morning to go to one of the most historical events ever…The Inauguration of President Obama. Wow is all I can say that I am actually going to be a part of seeing the first Black President being sworn in. So we got a really good deal on a flight and decided to fly into Charlottesville, VA so we wouldn’t have to worry about traffic, high prices and not being able to get a rent a car. As we started off that morning you couldn’t help but to be in a good mood at the fact that we were on our way to witness history and we had no idea what to expect. We had 2 layovers but there was no complaining because our spirits were high. All around us in the airport you could just feel the energy of what was going on. People had on Obama gear and it seemed like everywhere you turned people were having conversations about Obama and the Inauguration. It was really rather exciting to know that all these people in different parts of the country were talking about the election of Obama.
Once we got to our final layover and got on this tiny plane, it seemed like the whole plane was going to the inauguration. It was great because there was another couple just a little younger than us and they were so enthused about sharing in this experience together as well. The more we talked other people started joining in the conversation about how much they loved Obama and how lucky we were to be going to the Inauguration. So we made it to our final destination rented a car and headed to DC. To our surprise the highway going there was smooth sailing, no traffic just open highway. Whew….we finally made it and time to get some sleep.
Posted by The Hot One at 1:34 PM