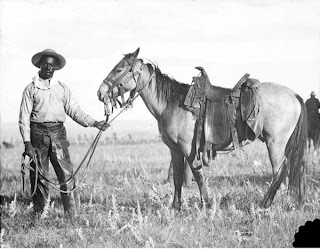 At work in the lobby of our building where we greet our parents as they drop off their children for the day, my boss, my co-worker and I were talking about the menu for our annual Rodeo Breakfast Event that our program offers to our families. The Tucson Rodeo is a big event in here. It brings in large dollars and gives us time to reach into the “Way-Back machine” and examine our roots. Schools take the event very seriously--to the extent of allowing the schools to close. For us, that means in our program we then have children all day instead of taking them to the public school they normally attend. Enter the “Rodeo Chuck Wagon Breakfast”.

I was trying to convince my co-workers to change the menu from the usual pancakes, scrambled eggs, bacon and the like, to something that would have been served from a chuck wagon. With this also being Black History Month, I started thinking about what Black cowboys would have eaten on the trail in “Wild Western” days. Naturally when people are put in new environments, they borrow from what and whom they interact with. I thought they would probably eat things that wouldn’t spoil and could be carried easily, like beans, beef jerky, and corn. Corn is a staple in the Southwest. It has been found in prehistoric dwellings of indigenous peoples here and is incorporated into the “family” of some native cultures as being known as one of the three sisters (squash and beans complete the trio).

I proposed -- to the wails of my co-workers -- that we serve pinto beans, whole or mashed like refried, corn tortillas, grits, cornbread or corncakes. (FYI: Corncakes, like pancakes, were also called “hoe cakes” during slave days by my ancestors because they could be baked on the blade of a hoe.) I would concede bacon, even though I thought a dried beef chile’ would be better. A roar of disapproval was raised in the lobby. My enthusiasm now was really warming up. Why Not have a “corn” meal? That was it! I started polling parents as they stepped in the door as to what was their favorite corn product. I disguised my inquiries as “the Question of the day”. Most parents gave me a puzzled look but generally responded with “cornbread”. Fuel for the fire. This most certainly could be a breakfast food. As my quest continued, I became more eager to talk to my next contestant as it were. Slooowwly I inched my way closer to the front door so I could get to them with the least possible lag time from when they released the door handle. It was amazing to see the wheel turning as they thought about their answer. A surprising few said “popcorn”. My mother said as a girl she used to eat popcorn for breakfast with sugar and milk--more validation as a breakfast food. Other entries were hominy, corn on the cob, polenta, green corn tamales, hush puppies and scalloped and fried corn. Only one parent said “Kelloggs”. Such an icon in the corn kingdom that no other words were necessary. As my coworkers Booed and Hissed at my “crazy” ideas to bring something different to the table, I implored them to just think about it!

It’s not that I have a passion for corn exactly, but more so for the idea of using things differently. How do we take something as mundane as corn and explore it and celebrate it? Can’t we change what we think a thing should stand for and just have corn for breakfast?
Posted by The Hot One at 1:22 PM