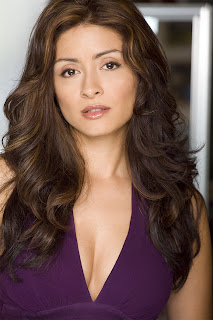 When "random" is not "random" is when you meet an amazing woman like actor, mom, artist, Rachel Matos.

Rachel and I met "randomly" through our crazy, passionate friend from Philly, Melissa Madison...whom I met online in a chat room. Sounds random, sounds out-there, but we met in 2003 on Backstage.com which was/is a forum for actors who are trying to feel their way out of a paper bag into this random industry called Acting.

Mel and Rachel attended an acting class at New York's "Black Nexxus" run by Susan Batson (coach to Nicole Kidman, among others) and her bad-ass director son, Carl Ford. I'd been studying there for years and begged the girls to come experience the rawness that I had been experiencing. (Rachel adds: Susan is the reason why I pursued acting so hard-core. She was very encouraging.)

They came, we saw, we tried to kick gritty acting ass.

Now, fast forward several years and we've all since moved to Los Angeles where we continue to kick-ass...but Rachel Matos is firmly stepping on every rung of the ladder as she clearly moves herself up, out and over that old paper bag.

This Bronx Babe who is part Ecuadorian (on her father's side) and part Puerto Rican, has not only managed to move to LA and audition and book regularly, but she has also maintained the balance of being a mom and a damn-good artist.

Do you remember your first piece of artwork? My mother was a young college student when I was toddler. She would take me to class with her, and all I did was draw the whole time so I don't exactly remember my first artwork. However, I do remember one of my crayon drawings getting into a children's art show that viewed at the Metropolitan Museum of Art. I was about 5 or 6 years old. It was a sillouhette of an island during sundown.

What do you think of the current art scene in LA versus the one you left behind in New York? Naturally, it's different but I try not to compare. NYC is a museum town. However, LA has lots of great stuff too ... many great galleries. You have to know how to follow the shows. It's not as convenient as New York. I have seen some amazing work out here too. 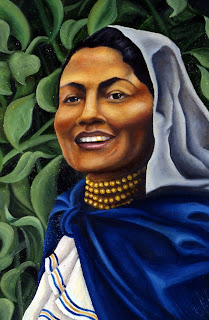 Where is your favorite place that your art has hung?
A few years ago I was a part of an art show at the Colombian Consulate in NYC. That was my favorite place. I remember feeling very connected to the latino community ... a part of all the moves they were/are making culturally and artistically.

What makes you love acting? When I was child, I would do little skits for my family. I loved to make them laugh, especially because they all worked so hard. Laughing and joking around was a big outlet for my family. I also grew up watching telenovelas with my grandmother and was completely enthralled by the latina actresses (like Patty Manterola). I had a secret desire to pursue acting ... but it never seemed like a reality. It just seemed like something "other" people do for a living. So my love for acting goes deeper than the craft for me. Every audition I get is like a personal achievement and a big thank you to my family, especially my grandmother, who I later found out had a secret desire to be an actress.

What similarities do you find in your approach to painting and to developing a character, if any? The approach is similar in that I have to work hard to get focused. That's the first step. I have so many things going on, it can be challenging to find the silence needed to be in the moment and to commit to the moment. Meditation helps me get there.

You mentioned on your blog entitled, "'Cause I Feel Like It" about an audition where you had to yell at another actor...a perfect stranger. What exactly did you yell at her?The director said to start off with "You don't understand .... " and take it from there. Well, who doesn't feel misunderstood from time to time? That day, I had a few things on my mind about the industry and the perception some people have so I said ... "You don't understand what goes into every job I get. You don't understand that for every booking an actor gets, they auditioned dozens of times. You don't understand the type of endurance and thick skin needed to be in an industry like this."

You are in a project, "I Heart Hollywood" about the stories of 14 working actresses in Hollywood produced my friend Mashari Bain and includes two other friends J Nicole Brooks and Jamie Burton...what did you learn most about working on this project? Well, I learned that I had a story to tell that people could relate to. I was just living life, doing what I felt was right for me at the time. When the director, Rebecca Hu, asked me questions about my life, I found myself having many moments of self discovery. We all have obstacles, open doors, successes, and failures in life, you know. We handle it differently. As I spoke, I realized how much I had learned in my journey ... how much I had grown. It was pretty powerful for me.

It seems like there is an interesting movement among Women and Art...do you see this? Is there a name for it? What do you think about it? I have definitely seen the progression women have made in the art world, but we have a way to go. I am not sure if there is a name for it. I certainly don't give it a title or label. I tend to follow the careers of individual artists, particularly from those who explore their cultural identity. Some of the women I find extraordinary are Rina Banerjee, Renee Cox, and Shirin Neshat.
Editor's note: I took a moment to view the work of each of these women...really vivid, wonderful work. Thank you Rachel!
This is a corny question, but, what is your dream role? Every role I accept is a dream role, because the dream is to be an actor. However, if I can script it right now, I would love be a series regular as a lawyer. It's another field I am fascinated with. If I had it my way, I would be a likable lawyer though. Wait, are there any? I would like to be the Claire Huxtable of the law field. There, a corny answer to go with the corny question!

You site a quote by Walter M. Schirra, Sr.: "You don't raise heroes, you raise sons. And if you treat them like sons, they'll turn out to be heroes, even if it's just in your own eyes." How is your son your hero? You know, children have such an innocent perception of the world. My son sees the green in the grass, the fluffiness in a squirrels tail, he savors every bite of mom's grilled cheese sandwich ... he feels the awesomeness of our universe and has a zest for life that I think many of us lose as we get older. Having him has taught me how to love and how to see the world through his eyes ... And for that, I say he is like a little hero to me. 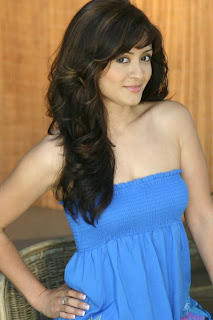 From where do you draw your confidence?
When I was in the second grade, my little crush liked someone else. I remember telling my mom how the girl he liked was taller, had longer hair, better grades, and was prettier. I remember my mom saying "Rachel, in life there will always be someone prettier, taller, thinner, smarter, fatter, shorter ... you cannot compare yourself to others". That simple sentence stayed with me and I learned to not take things so personal (see parents, sometimes kids do listen). Years later, my acting coach at Stella Adler started off class with "Guys, you are all a character in your real lives. Don't try to be a character that is not you. We are all different and have something to offer. Be you in the situation at hand. Be who YOU are and just go with it". It's just in my head that I have something to offer ... that my life experiences will bring something to the table. When I walk into an audition, I just do me, and if they like it, great. If not, then I move it along. It's not personal for me.
What's next for you?
I am working on a series of paintings and I booked a webisode called "The Devil You Know" directed by P. David Ebersole. It's a novela, which you now know has a little special place in my heart. More importantly though, I am the mama of a very athletic little guy, so as much as I love working, I am full-time sports mom with a knack for making the best fry bread in town ... and watch out for the documentary coming out this summer.

The less you open your heart to others, the more your heart suffers - Deepak Chopra
Posted by The Hot One at 2:14 AM

"Every audition I get is like a personal achievement and a big thank you to my family, especially my grandmother, who I later found out had a secret desire to be an actress."

Great interview! Thanks for posting!

What a wonderful interview Rachel, I'm so proud of you!!
Love you always, A.

This was great, you are such a down to earth and easy going person. It was a pleasure to read.

Great interview. You are such an inspiration and I'll be sitting front and center when you get that oscar.

Rachel your a goddess. I adore you...

I knew u always had it in you. Go gettem girl..

Your blog keeps getting better and better! Your older articles are not as good as newer ones you have a lot more creativity and originality now keep it up!