Two Sides to Every Love Story
by Peppur Chambers
I’m not super political, so I can’t, won’t and don’t debate politics. I rely on my friends like Derrick Ashong to speak my mind (you’ve probably seen his You Tube video where he eloquently thwarts Obama questions from a reporter like he was a Williams’ sister kicking ass at Wimbledon). I hope I can return the mind-speaking favor on another equally important topic sometime in the near future.

My 18th birthday fell on an election day and I was thrilled as a Black woman to be able to exercise my right to vote. I’ve done so ever since with less than desirable results…I’ve given up on politics, you might say. Even with this outlook, or attitude, if you will, I still find it enormously ironic to have such monumental choices in which to chose from this Presidential Election. I love this two sided coin we have (with one side being rubbed away with each new MSNBC commentary). I love the controversy being created by countless stories surrounding the individuals running because I love that it’s shining a light on what people really think…and forcing them to verbalize their fears about an impending possibility. Again, being a Black woman, I find this election to be an interesting love story. Based on the following items concerning Barack and Hillary, I’m definitely not alone in my findings:

I came across these two items through forwards of forwards in emails. I do not know the source of this Obama/Hilary picture; if you know the artist source please comment with it! The pic is entitled: "BarackillaryObamainton". 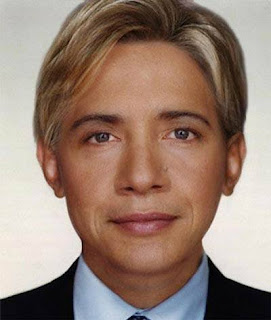 Also through email, I received this link to a Washingtonpost.com article:
A Vote of Allegiance?
By DeNeen L. Brown
Woman has an ocean of wrongs too deep for any plummet, and the Negro, too, has an ocean of wrongs that cannot be fathomed. There are two great oceans; in the one is the black man, and in the other is the woman. . . . I will be thankful in my soul if any body can get out of the terrible pit."
If you are undecided on whom to vote in this year's love story, catch some moving words from Derrick here on why, at a minimum, it's crucial to excercise your right to vote.
See you at the polls in November.
Posted by The Hot One at 1:16 PM