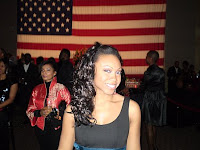 Our Brown Bettie Keena traveled to President Obama’s Inauguration in Washington, DC and kept a small diary. Here is Day 3 of her travels:

Day 3:
My Godmother dropped us off and we were all bundled up with our coats on top of coats, boots, scarves, and small personal items because you couldn’t bring big items into the ceremony. As we got closer downtown the subway filled up so much that we became real live sardines on the subway car. I mean seriously we were all pushed together in closer proximity than you normally want to be, but again everyone’s spirits were in high excitement and there was no complaining, because what…we were going to the Inauguration! When we finally got to our stop and got off the swarm of people was amazing. As Ajamu pointed out it looked like liquid people. We walked to our section and the line was already ridiculous. We got in the midst of the crowd and people were talking and laughing but were definitely feeling the cold weather. They weren’t opening the doors to the actual lawn of the ceremony till like 8:30am and it was just 6:15am. After what seemed like a long time I realized it was only 7:30am and I was literally freezing. I bought some hand warmers from another woman standing in line and at this point everything was freezing on me and all of these millions of people were not creating any type of body heat whatsoever. I looked at Ajamu and said, I’m not sure if I can make it.” I was completely freezing and I still had another hour to wait and then still had to stand outside for the ceremony for another couple of hours. Now let’s see that equals out to at least another four hours and I honestly didn’t know if I would make it. There was no sun just freezing temperatures. There was the comedy of people trying to cut in line and this white girl beside us trying to start her own rally/protest yelling at them, “Don’t cut the line, don’t cut the line,” repeatedly but she herself was too afraid to go over and say anything. Finally, another woman did and she chanted and cheered for her bravery although she only wanted to chant from the sidelines and watched other people actually say something. Needless to say I stuck it out for hope, for inspiration, for history, and for the love of President Obama. (He owes me one) So they finally let us in and because we didn’t get in line the night before like others we had to stand but fortunately the sun came out and was right over us and I started to warm up some. Well now Ajamu was freezing and getting a little irritable but the lady who sold us the hand warmers gave us some foot warmers for free.

The crowd of people was just more than words and everyone was anticipating this moment. One woman passed out in front of us because she had not eaten and was a diabetic but after almost 10 minutes finally the paramedics came but aside from that there were no real issues. (Oh and they only had 500 port a potties for a million people) Finally, the ceremony began with some music and children’s choir (but it honestly wasn’t that interesting) I think they should have a dj for the ceremony so people can dance and it would have kept us warm. Finally government people began to arrive and once Vice President Dick Cheney, President Bush and Mrs. Laura Bush arrived you heard a thunderous Booooooooo. I was almost embarrassed and felt sad for them but then I realized that is the least they deserve after the state of this country. One man even yelled out, “You ruined our country.” I must agree with him on that one. The ceremony itself happened with not much to do but then President Obama raised his hand and took the oath and people screamed, cheered, cried and rejoiced for the new day that was beginning. In that moment everyone for miles around became one voice, one connected spirit as we all were happy to be there to be able to witness this momentous occasion and we knew that we were a part of something that you could never take away from us. That was it; that was all that was written; Barack Obama was officially the President of the United States of America and people of all colors, ethnic backgrounds, and various religious faiths had troubled far and wide to support and put their faith in this man and what he can do for our country. I was so proud that day to be an American and to be a part of something spectacular.

Keena Ferguson is a Los Angeles-based actor who has also co-produced and written her first short film, KAI. She plays "HATE" in Harlem's Night Cabaret. Learn more at www.keenaferguson.com
Posted by The Hot One at 11:38 PM