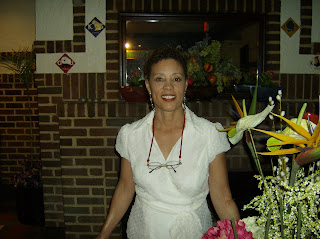 The coming of Easter this year and the memories it evokes once again takes me into the “Way Back Machine” to a time in Lawrence, Kansas when we lived on Mississippi Street.

Mississippi Street was a tree-lined haven with a brick-paved road; this was typical of many streets in Lawrence. Our house was in the middle of the block, placed at the beginning of a small incline. This house seemed huge to me, during my early years in the 1950’s. It had a front porch that covered the entire length of the house and a smaller one in the back. On the left side of our house was a sidewalk leading to the backyard and a similar house to ours. The backyard consisted of a small concrete pad, the entrance to the basement and a clothes line. Beyond that, there was more yard and the alley dividing the neighbor’s house and ours. On the right side was an empty lot filled with trees between us and those neighbors. It was magical there. It made me feel like anything could happen and all things could be discovered.

It was back here one Easter that magic happened, kind of. Easter was one of the few times during the year when my three sisters and I got something new; usually new dresses and shoes for church and maybe a hat and gloves. One year, I was perhaps four, we got chicks for Easter. This was really new for me, because everything that came into our house before that served a purpose and these definitely, in my mind, did not. They were just small enough to fit in the palm of your hand. There were four, thus avoiding any arguing about sharing. The cool thing was they were pastel. I mean, really who takes the time to color a chick? That was an extravagance in the 1950’s world of Vicki Rogers. These fuzzy little balls were pink, yellow, green and blue. I don’t remember where they came from, probably my Grandma Rogers. She liked chickens, so I’m told. Think about it, who in their right mind (even if it is your favorite grandmother) would give four little girls baby chickens, we were just babies ourselves. Just because we had a big yard didn’t mean we weren’t city girls. What were we supposed to do with chickens? They didn’t come with a coop or food. They just dropped in from heaven - or not. Were we supposed to keep them until we could farm eggs or have four chicken dinners? We didn’t even have a fence, for God‘s sake. My mother certainly didn’t have time to bring up chickens along with us.

I just remember being in the back yard as they were suddenly dropped beside me. Like magic. In their box, each one was chirping and spinning like a little wind up toy. Sometimes when you are little and your focused horizons are hem lines and knee caps, voices simply rustle like the crinoline slips you wear beneath starched cotton skirts…often, just an instrumental background to your own thoughts. So things drop before you like manna, without instructions. I remember petting them and trying to corral them as they bounced around the yard, even while the sunset deepened. In that light, they began to glow like fireflies each, still chirping as we played hide-and-seek in the grass. Momma called us inside. I, the last in the yard, finally stopped chasing them and went inside.

It wasn’t until morning when I woke up that I wondered how those little chicks were doing. I went into the backyard but I didn’t see the colored balls of cotton anywhere. I didn’t hear them cheep-cheep either. I looked under both porches thinking maybe they had slept there and no chicks. I wandered out to the alley, no chicks. I searched in the vacant lot around all of the trees. No chicks. I returned home and questioned my sisters. No one had seen the chickens -- they were just gone*. Strangely, we all didn’t seem too concerned about their disappearance either. I never really got an answer to what happened to the chicks. However, by the time I gave up looking for the chicks, I did remember it was time to feed the cats - Soda Pop, Fluffy and Ink Spot - they kept the mice outside.

Editor's note: While searching for a cute pic of chix, I came across another Easter Chix story.
Posted by The Hot One at 10:37 PM