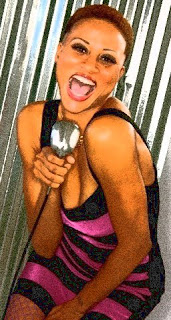 What’s in a name? In this case, when the name is “Nika”, you get a humble woman full of passion, determination, and a whole-lotta funny. Nika (AKA Shenika Williams) is a powerful entertainer on the rise and she’s solidly confident with knowing her current journey is leading her to the top.

What do you love about comedy?
Comedy has always been an outlet for me. Whether it is as a spectator or performer, I love to laugh and make people laugh. It's a God-given talent, and I always have to remind myself it's not about me, but how can I use this gift to bless people. During these dire times, it's important for people to laugh and know that things are going to improve.
What do you love about performing?
I absolutely love the instant response you get from the audience during a performance. Yes, I'm an "audience whore". When I perform I feel this unbelievable, sometimes overwhelming, wave of energy. Oh yeah, I love the lights, costumes, make up...I just love the stage.
When was the moment that you knew you were good at what you do?
Honestly, I don't think I'm really good at stand-up comedy yet. I've only been doing it seriously for 2 years. When I study the masters, (Pryor, Martin Lawrence, Murphy), I am in awe at their impeccable timing and innate ability to make a room of people laugh at the same time. I haven't even scratched the surface.
Do you have a favorite club where you like to do Stand Up? What do you like about the club? Lights/mic/stage/people/nights, etc.
I don't have a favorite club. I will perform anywhere there is more than one person, a mic and a space that resembles a stage. I am always testing new material on people unbeknownst to them. Or, if I meet a character, I will mimic them in one of my bits. Comedy is a slice of life which I enjoy reinterpreting on stage.
What is your dream as a comedienne?
My dream as a comedienne is to rule the world. Or if that's unattainable, touring and selling out arenas like a rock star. Eventually after touring, I will have my own sitcom which will lead to movies. Then I will take over the world for sure. Watch out Will Smith, I'm coming for you!
What is your dream as a person?I have so many dreams, but my ultimate dream is for people to learn how to love and honor one another. I know that sounds cheesy, but Hey, I'm a dreamer!
You are from Florida originally; what have you taken from home that you've used in your performance?
I'm originally from Liberty City, one of the worst inner cities in America. Coming from a rough neighborhood, I have several childhood experiences that are not always flattering, but they're funny. When I talk about my drug-addicted uncle stealing my grandmother's frozen chicken to sell it for crack…It's awful, but nevertheless comical.

How do you describe your style of comedy?
My style of comedy is uninhibited, energetic, smart, edgy..... It's ME! When I am onstage, the only way for me to be funny is be myself. Everyone has an opinion on how a female should be on stage. It's a double standard. But I don't censor myself if I feel like saying "Shit" 100 times, I will. I don't like to feel stagnant because when I'm not having fun, the audience isn't either.

Doing Stand Up has a formula to it (my opinion), how have you learned to create and perfect your formula? Who have you studied?
I have my 100 days of open mics. For 100 days, I videotape myself performing new material, then I study it. With anything, you have to study your craft. By the way, I dislike this process because I don't like to see myself on screen, but I force myself to look at it from an objective perspective. So next time I do the joke, it's more tight in the delivery, wording and timing. I've studied Pryor, Martin, Rock, Murphy, Robert Klein, and any up-and-coming comedians. I'm always studying the art of laughter. It's really an amazing thing! To make a room full of different people with different sensibilities laugh at one joke that you thought of.
You are also an actor and a model; how have these parts of you affected your craft? Stand up allows me to talk about my frustrations as a struggling actor, and annoyance with the modeling industry's strict stipulation of being super skinny. However, I am an actor first, then a model...then a stand-up comedienne. Modeling and stand up are sometimes interchangeable

depending on how much I weigh at the given time. People are literally laughing at my pain! No pain, no gain right?
How did you develop your stage name?My stage name is still a work in progress. My real name is Shenika Williams. My agent informed one day it was a little too ethnic (I wanted to tell that heifer, “Bitch, I'm Black”). So I dropped the SHE and just went by Nika which means “Victory”. Nika was also written along with a traditional abbreviation of the Greek words for Jesus Christ on the cross: ICXC NIKA, meaning “Jesus Christ Conquers”! It's all in the name!
What's next for you?
I don't know what's next for me. I have some things I would like to happen, but it seems to always work better when I allow God to direct me. But wherever it is, it's on some next level shit times 1000.